I was reading an article today that was all about the magic of college football. It captured the spirit of the game and why it is that so many of us love it. It's rather lengthy, but it got me thinking about why it is that it captures me - why I can't look away. This quote really summed it up for me:


College football is the world's biggest insiders' club, a sport with too many inane, insanely enjoyable traditions to count. It is off the beaten path. It is messy and absurd. It is nonsensical. It is wonderful. It is always changing, and it never changes.

What a wonderful description. It seems that at least once a week there is a game - not involving my team - that makes me say, "Wow, I love this game." One of the truly marvelous things about the sport is that on a football Saturday it seems like the whole country is in one place. Radios are tuned, TV's are hooked to satellite dishes, and scores are announced. It's truly not just about your team's game - it's about the entire picture, with each Saturday being its own work of art.

But one particular point of the article grabbed my imagination. The author talked about that moment each of us has when college football grabs hold of us. When we realize that it's something that will hypnotize us every fall, making the days of the season fly by like a speedy freight train. And making the days of the off season drag like a tortoise.

And so I thought back to my childhood, looking for a moment when I knew that loved the game - not just Alabama football (that moment would be the first time I walked into the stadium and saw Kenny Stabler lead the Tide to victory), but college football. The game, the pageantry, the whole picture. 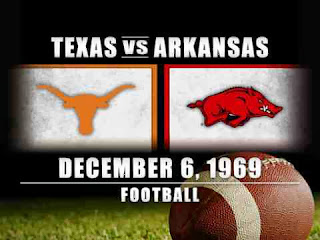 It's the first time I remember building a day around watching a non-Bama game on TV. I was ten years old, and the hype was at an all-time high. Two undefeated teams, playing for #1. President Richard Nixon was there, and was planning to present a championship plaque to the winner after the game. And what a game it was! Arkansas jumped out to a....

You know what? Watch this 6 minute highlight video - I don't want to spoil it for you!

So, wow, right? If you didn't watch it, Arkansas jumped out to a 14-0 third quarter lead and looked to be in total control at home over the top-ranked Longhorns. But quarterback James Street (who passed away earlier this year) led an amazing 4th quarter comeback, which included a 43-yard touchdown run, a two-point conversion on the option, and then a long pass on 4th and 4 to set up the winning touchdown. It was dramatic, it was riveting, it was exciting. And it didn't even involve a team I cared about. I was hooked. 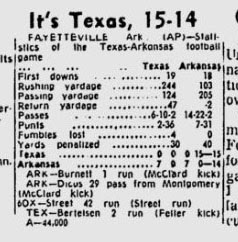 Yes, it is a wonderful thing. And it's going by way too fast. It doesn't matter that it's a Saturday like this one where the Tide has an open date. It's college football. And it is awesome.
Posted by Donnie Manis at 8:43 PM