Where is my hope?

The end of the year is approaching. The New Year holiday is normally considered a time for new beginnings, resolutions to do better, the putting behind of the mistakes of the previous year. But this new year comes with a shadow looming over it - something called the "fiscal cliff."

It seems to me as I followed the last election and the news of the day that everyone has financial security on their minds these days. Conversations with friends and work colleagues certainly support this. How do I process all this anxiety as a Christ-follower? Enter the prophet Habakkuk. 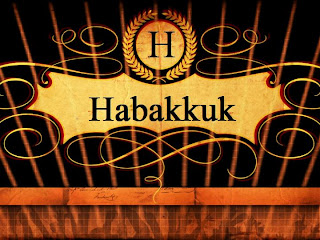 Habakkuk lived at one of the most discouraging times any nation ever faced. Israel had been blessed by God, beginning with Abraham's call, continuing through the Exodus and the establishment of a kingdom in Palestine. But now they were facing disaster. God's judgment was coming through the invasion and occupation by the Babylonian Empire. For years it was easy to be thankful to God and bless his name. But now things were getting hard. How to react?

As Habakkuk pondered this, he finally prayed to the Lord in chapter 3 of his book. He told what he saw, and was very open about his fear:


I trembled inside when I heard this; my lips quivered with fear. My legs gave way beneath me, and I shook in terror. (v. 16)

But then he uttered these amazing words, words that can transform one's attitude toward trouble, and the fear that accompanies it:

And there it is.

Habakkuk's hope was not in the crops and the cattle; in our terms, it was not in his wealth or financial security. He's nervous sure, he expresses that fear. Nothing wrong with facing that human emotion head on, and telling God how he feels. But in the midst of that, he rejoices! He is happy! Why? How? Because his hope is not in those things. He says that God can allow every single one of them to be taken away, but it doesn't matter. It doesn't matter because his hope is in the Lord, not the things of the world.

I have seen first hand that what Habakkuk says is true. I have worshipped with believers in regions of the world where they cannot even imagine the lifestyle we have. You know, the lifestyle that we not only take for granted, but actually get defensive when it's threatened as if it were our right. And you know what? Those Christians have every bit of the joy and contentment in Christ that we do. Maybe even more, because they have not tasted the fruit of material prosperity - fruit that can so easily become a poison to our spiritual health. Compared to us, the "trees have no blossoms" and "there are no grapes on the vines." But they have joy.

So I'm going to pray for the strength not to worry. Our economy may survive the current stress; if that happens, I will continue to be thankful for God's blessings and use the resources he trusts me with to build for the Kingdom. It may not; if that happens, I will rejoice that the Lord is all I need and depend on him to get me from day to day. I'm not going to determine my beliefs (personal, social, political, or otherwise) based on what is best for my lifestyle; I'm going to base them on what is best for God's kingdom.

The fiscal cliff may be a long, hard fall. It may not. Either way, blessed be the name of the Lord.
Posted by Donnie Manis at 5:29 PM